Today’s interview is with Soren Holmberg, a  expat who is living in Latvia. 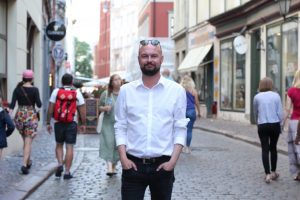 ER: Where are you from?
SH: I am from Odense Denmark. A city with around 250 000 inhabitants and most famously known for being the hometown of the fairytale author Hans Christian Andersen.

ER: Is Latvia the first place you are living in like an expat?
SH: No, I have also lived a year in London, and partially in Tallin when my son’s mum worked there for some time.

ER: What was your previous experience? For how long have you been living in the United Kingdom and Estonia? Why did you move?
SH: Actually living in London was a part of my studies. I had an internship in a media corporation and after the end of the semester, they asked me to stay on. I returned to Denmark after another half a year, as I grew tired of living in a dorm and could not afford my own place. That was the point when I found out how private a person I am, ha ha.
When I was with my son’s mum, her studies took her to Tallinn for an internship. At that time I was working in a theatre as a project manager, so I had the opportunity to work remotely when we did not have any plays on. I flew back and forth between Denmark and Estonia quite a lot then.

ER: For how long have you been living in Latvia? How did you know about Latvia and what were the main arguments for moving here? Like the climate, mentality, other things.
SH: I started coming to Latvia some 8 years ago, as my then girlfriend was Latvian, but I have been living here for one and a half year. Already back then I fell in love with Riga, which is a beautiful city, full of contrasts that you don’t see in Denmark, where the society is much more homogenous.
I moved here to be closer to my son who lives with his mum here, what might also be the reason why I don’t really see myself as a typical expat, if such a thing exists. It is not like I woke up one morning with a huge urge to leave Denmark and pointed randomly to a map of Europe, ending up with Latvia. I moved here for practical reasons if you can call it that. I missed my son terribly and I wanted to be a bigger part of his life.

ER: Have your expectations proved to be true?
SH: For me I think it’s a bit wrong to talk about expectations, especially if you mean towards the society. I had some expectations in regard to being a part of my son’s life, and they have come true.
I would like to say though, that I was quite surprised to experience the bureaucracy here. It’s like the Berlin wall is gone, but the Soviet Union still stands, ha ha. Getting registered, getting an apartment, buying a phone. Everything unleashed a pile of papers, worth a high government office. That took some time to cope with, while in Denmark almost everything is done digitally with your citizen ID.

ER: Which positive traits of Riga and/or Latvia have you discovered as well?
SH: Rigans are very friendly and the cultural life here is rich. I have worked in the event and culture industry almost all my life, and now when I am in the IT world, it is nice to live in a city where something is going on every day. I loved all the events during the Song Festival, and it is very touching to see the Latvians relation to their country and nationality. We Danes do not value nationality the same way, so I will probably never fully understand this, but I remind myself that Latvia has been in a war up until 1991, while Denmark has not been in a real war since 1864.

ER: What have you learned from living here?
SH: I think that apart from having kids, moving abroad for good is one of the most life altering things one can do. It was for me at least. If I had to go into details on this, I would tire your readers out, but a lot of aspects of one’s personality come to revision when you all of a sudden live in another culture.
Maybe I can give one example. Dating. It is very different here. I am still trying to figure out how to get a girlfriend, ha ha. It has to do with the gender roles and the equality or lack hereof in the society I guess. Feminism for example, in Denmark, means the right to be a strong independent woman who leads her own life. Here, and sorry for the stereotype as this of course is, feminism, for the most part, means the right to look good, never pay expenses and put all faith in the man’s decisions. You would have to go as far back as the 1950’s to find anything similar in Denmark. Now I will probably have a heap of real Latvian feminists in my inbox complaining, ha ha, but you can probably imagine there’s quite a clash of cultures there.
Furthermore, the fact that Latvia is such a young nation, only turning 100 years this year, while Denmark has been Denmark since Viking times, makes me reflect a lot. About who we are, about identity etc. The East/West conflict is a much bigger theme here, and that has made me realise how much I appreciate the EU. Today, if people ask who I am, I would say I am European, before saying anything about nationality or where I live.

ER: How do you spend your free time here? Which places in Riga do you like the most?
SH: Moving here only a year ago, I have spent much of my spare time being with my son and trying to settle in, organizing my life here. Furthermore, I have changed industry, when I moved here, so I have had to study a lot in my spare time to obtain certain certifications that are needed in my position as an IT Team Manager.
I love the parks. Kronvalda, Vermenes, Zeidondars they are great places to sit with a book and read. As I am quite a foodie, I love to cook myself, but I also like the restaurants. Moltto in Centrs and Fazenda in Agenskalns are just a few favourites.
Not that I go out much anymore, I’m close to forty and my energy for that sort of things is fading, but after work I sometimes go to have a beer at Kiwi Bar at Skarnu iela. It hosts a crowd of expats of all different kinds and it has become sort of my starting point for getting a network outside work. Apart from that, Left Door in the Silent Quarter and Taka at Miera iela are places I also like.
In general, I try to attend as many culture things as I can. Balta Naks, Baznicu Nakts, and all sorts of other things. I have a friend who recently did an amazing modern dance performance at H2O 6. That was really breathtaking, and I love that Riga features events from the very popular like Song Festival to the very underground like that.

ER: What would you recommend to other expats, who are just planning to move here?
SH: Plan carefully! And if you come from a country with a greater economy and higher salaries, beware! It takes a lot of getting used to, to have a lower salary. Downsizing is difficult. I get sick when I think of all the money I’ve burned, when I just moved here.
And forget about “this is how it is supposed to be”. Get used to the things that work differently in a different place. I wasted a lot of energy on chasing things around until I have realised that I just need to let go.

Published by ” Expats in Riga “